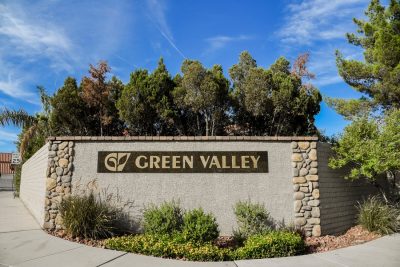 Green Valley houses for sale flew out the door because they were in beautiful communities. Well maintained, neighborhoods with walking trails and parks drew families, singles, and retirees. When the Strip Hotel Boom happened, Green Valley was home to everyone from the construction companies executives to the workers. When hotels opened, more workers moved to Green Valley to be close to the Strip.

The 15-year span of the late 1980s to the early 2000s saw the completion of most homes in GV. There’s a diversity of landscaping and styles, and the master plan is fabulous! In the past, I had many clients think of Green Valley, NV as a city, but it’s not- it just seems like it.

Green Valley high school, home of the Gators, is one of the best high schools in the Las Vegas Valley. Henderson loves their high schools! Henderson also loves private schools and higher education.

The master-planned community of Green Valley was so successful that as soon as it was built out, Green Valley Ranch opened. Even 20 to 30-year-old Green Valley homes for sale sell quickly. Houses are so popular that if you want to live in Green Valley, save a search to see homes as soon as they become available.

If you are looking for a home for sale in Green Valley or anywhere in Henderson, explore our pages or search homes by Henderson zip code map.  Here are links to Las Vegas, and North Las Vegas in case you want to investigate homes for sale there.

Green Valley homes for sale are in lovely neighborhoods that have wide, winding roads and beautiful, luxurious homes. Over the years, the trees are older, full, and beautiful, and the entire area has a pride of ownership that shows above everything else.

Golf is prevalent, stores are plentiful, and schools are award-winning and convenient. Green Valley homes for sale are in areas near everything a person could want, all within a few miles.

With 2 larger hotel/casinos in the area, Reid International Airport close by, and the 215 Beltway, Green Valley’s location is central to most of the Las Vegas Valley. When the beltway went in the area south of Green Valley, Green Valley Ranch exploded.

Shopping Near Homes For Sale in Green Valley

Landscaping is immaculate and community centers and recreational centers are in every larger park. Whether you live in a single-family home or a multi-family, there are amenities and greenery everywhere you look.

Homes for sale in Green Valley are in beautiful neighborhoods for affordable prices. Let me show you some. We’ll compare the areas in Henderson with their amenities. You’ll be impressed.

If you are unfamiliar with the Las Vegas Valley, we often clients a housing tour to show you differences in areas. We’d be happy to share our knowledge and area expertise with you. Give us a call for an appointment today at 702-750-7599.

See our page about Green Valley Ranch and also our New Construction Blog. There are over 225 subdivisions under construction with over 1000 floorplans. With how quickly homes are built in Southern Nevada, having our 25+ years of knowledge on your team is invaluable.

Personalize ANY Home Search on our site: The Top-Right corner of all results has REVISE SEARCH and SORT buttons. Save Searches and FAVS in a private box. Come Back Anytime- Bookmark Us!

The Start Of The Green Valley Master-Plan

It was a brainchild of Hank Greenspun, who was the owner of the Sun Newspaper. He founded the American Nevada Corporation, and they finally got approval for the Green Valley Master Plan in 1978.

When The Strip hotel boom thrived in the 1990s, homes sold faster, and in 1994, Green Valley Ranch added expanded to enhance all of Henderson, including Green Valley North and South. Seven Hills started selling in 2004, also an ANC project, with 1300 acres and 2500 homes in 25 neighborhoods.

American Nevada Corporation also has a 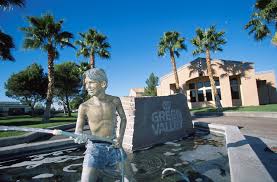 division for managing these communities. ANC developed Aliante in 2004 in North Las Vegas as joint partners with Pulte Corporation.

They built at least 9 lovely commercial complexes in Henderson and North Las Vegas in the last 30 years. Green Valley’s founders Hank and Barbara Greenspan, have an estate that gives generously to the community.

What Is A Master-Planned Community?

“Master-Planned” is where before homes are ever planned for, the area around the block of land gets planned as to the location of the amenities. These include schools, retail shopping, Parks and Recreation, emergency services, employment, golf, apartments, etc.

Then housing is added to the plan. Houses in each community include small, medium, and large homes and sometimes luxury custom or semi-custom homes. After the developer plans and moves some dirt, they install the main roads with utility hubs.  Then builders buy raw land from the developer.

Houses are plotted to best utilize the available land while adhering to the basic guidelines. There are guidelines, color schemes, and CCRs that every builder incorporates and puts on their community.

In 1985, life-like bronze statues started appearing at busy intersections and along green-belts. They were very life-like and entertaining. I couldn’t find very many pictures, but I found a few… 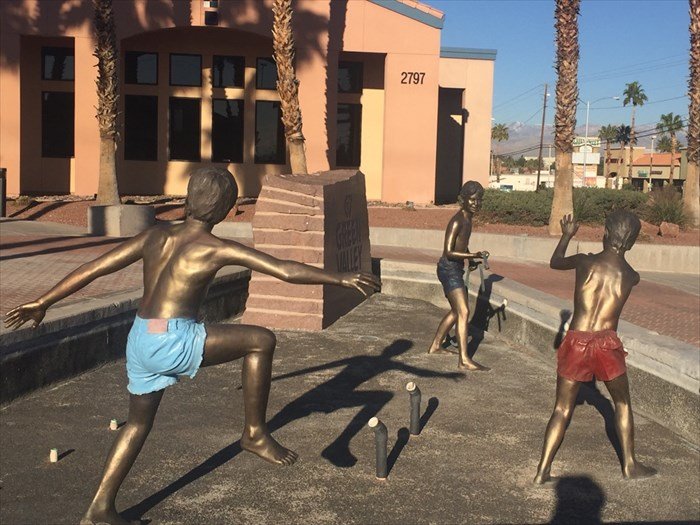 The first-time I showed homes in Green Valley was in 1993. I remember driving through streets with no traffic, great-looking homes, and green grassy walking paths and sidewalks.

It took a long time to get there on surface streets. We came to a corner with a bronzed statue of a man sitting on a bench reading an opened newspaper. It was very cool. Then at the next intersection, there were two bronzed golfers.

I had to go back without the clients to look for more, and they were everywhere! There were probably 50-100. Over the next 10 years, they were switched around a couple of times, but that was my favorite thing in all of Green Valley!

The statues are gone now. I read that they were removed for water conservation and because they confused people and held up traffic. They need to be at the Neon Museum or in a park. We have no clue where they are now. Kurt says they went golfing and then to Starbucks…

The Rapid Growth Of Henderson, NV 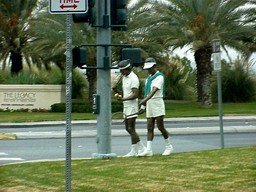 In 1995 our wedding coordinator looked for land to build a wedding venue. I showed her a 5-acre vacant land parcel fronting to Lake Mead Blvd for under $200,000. Lake Mead is now St. Rose Pkwy, and it was at Eastern.

I am amazed at the changes 25 years have brought. In 1995 we were in the middle of nowhere with no utilities. She thought that it was too far out for wedding guests to attend. That intersection is one of the busiest intersections in the entire Las Vegas Valley today. What a difference in only 25 years!

This website and information are made available for you to explore by Kurt Grosse with Realty One Group. Kurt is a Las Vegas Top-Producing Realtor since 1996 and a Retired Nevada Building Engineer (PE, CE).

Kurt’s goal with every buyer and seller is to use his skills and knowledge to protect them and their investment. With how quickly homes are built in Southern Nevada, his skills are invaluable.