Off I-95 North Past Mt. Charleston

Indian Springs is a small town about 45 miles north of downtown Las Vegas. High Desert State Prison calls Indian Springs home, and Creech Air Force Base is just north of there. I describe the town as having a few homes in the middle of nowhere with great value and lots of dirt. The population was at 991 during the 2010 census and continues to grow. Many residents living in Indian Springs work at the prison, Creech, or the Nevada Test Site.

In October of 2020, a new construction builder started building model homes, and a Bob’s Big Boy Restaurant announced that it was hiring. There is growth happening finally!

Even though the town is small, there are usually a few homes for sale. In fact, Indian Springs has it’s first new home development, Solaris at Indian Springs by Beazer Homes. If you’d like to invest in Indian Springs real estate, let’s go for a drive.

The prison is currently the largest correctional facility in the Nevada Department of Corrections, capable of housing over 4175 inmates at the prison. Because of its size and location, it continues to expand. It is one of the most technologically advanced prisons in the country. As a result, it is the reception center for all inmates in Southern Nevada.

The next closest facility to Indian Springs is Creech Air Force Base. Creech is known as the base that flies the drones. Most service members at Creech carpool from Las Vegas to work each day.

Further up the road, about 20 miles, is Mercury. Mercury is home to the entrance road to Yucca Mountain and the Nevada Test Site. Congress first approved Yucca Mountain in 1987. First came testing, next came drilling the tunnels for waste storage. Lastly, if the Nuclear Regulatory Commission licenses the site to store waste there, the state realized that transportation to the site would be a problem. The battle continues. 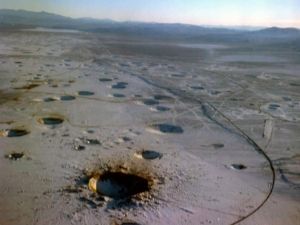 Yucca Mountain is part of the Nevada Nuclear Test Site. The Nevada Test Site began in 1951 and operated until 1992. The test site, operated by the United States Department of Energy, covers over 1360 square miles of desert and mountains. The 40 years that the Test Site operated saw over 1000 nuclear tests. Most of the nuclear fallout blew north into Utah.

We sold a house to a family in 1999 who worked for the Department of Energy. His job was to try to figure out a way to stop radiation from the multitude of blasts from reaching the groundwater. When further questioned, he said that radiation travels about 1 inch a year through the dirt. I am grateful that someone has that job even though it won’t become an issue for centuries.