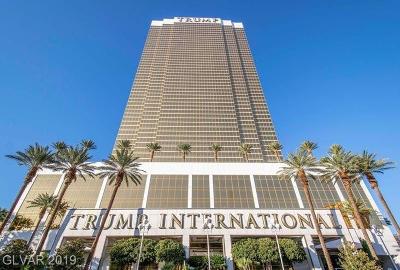 Although Trump International Tower – a high-rise condominium- hotel, is a block off the Las Vegas Strip, with the location directly across the Fashion Show Mall’s side street, Trump International Tower is great! Walk past the mall to Treasure Island and then Bellagio, then cross Las Vegas Blvd to enjoy the Venetian, Wynn, and Encore. The numerous nightclubs and fine dining neighbors keep residents here happy 24/7.

Trump International Tower is a Hotel Condominium. (See below) This means that investors can buy a residence and stay when they want. During vacancies, the owner can choose to have the reservation department rent it. 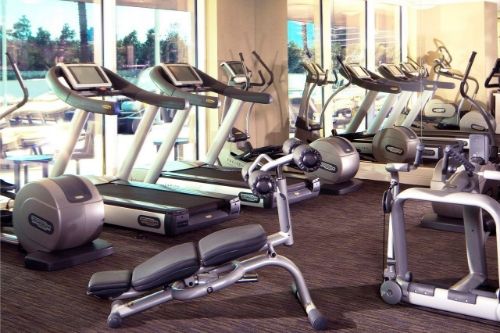 The amenities are World-Class Luxury, and the name makes it a sought-after place to stay for some people.

There are 1282 residences in Trump International Tower. Penthouses are above the 60th floor, and suites look north and south with Strip Views. Condos come in studios, and 1-3 bedrooms all luxuriously appointed. There are full-time residences that live in Trump with their own furnishings. If you purchase a custom furnished suite, it will not qualify to be in the rental pool.

The History of Trump International Tower In Las Vegas

The Trump International Tower is the 3rd highest tower in Las Vegas and #333 in the country and was built on 3.5 acres of land. Construction was scheduled to start in May 2005 with every one of the 1282 condominiums pre-sold. A second tower was planned and highly publicized on the TV show “The Apprentice.”

Groundbreaking for the first tower was delayed for 6 months, so it took until 2008 for the tower to be completed. Upon completion, only 21% of the units were actually sold because money and loans were getting harder to obtain. Donald Trump’s Organization sold the project as the recession continued. Plans for Tower 2 were canceled, but the possibility of Tower 2 being built still exists.

In 2018, 300 of the Trump International condominiums were sold to Hilton Grand Vacations with the Trump Organization remaining as management. This was a great solution to accommodate many Hilton Timeshare Owners and provide cash flow to the owners.

In February 2020, Hilton Grand Vacations announced a partnership with Resorts World, a Malaysia Corporation, to finish the 84-acre resort on the land behind Trump about a block away from the tower where the Stardust was for many years. This mega-resort is scheduled for completion in 2021.

With 1282 opulent suites, Trump International is a fabulous place to live, be, stay, play, own, etc. The decor and amenities all have class and are first class. With gardens and sitting areas throughout, you want to explore. The business center and board room are so luxurious that that’s a great place to impress business associates for a meeting.

The first time I went to Trump International Condominium Tower, I remember thinking it would be a bit gaudy after seeing the lobby with giant chandeliers on The Apprentice. I was pleasantly surprised. What I hadn’t seen on TV was the warmth that the color schemes and decor creates within the suites.

Numerous weddings and social events are held in the garden or ballroom. 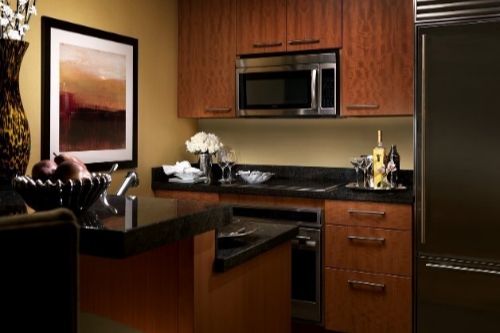 The pool is very large and is surrounded by great cabanas made for parties or an intimate group. They are fully appointed with all the smaller details you’ll want. A state-of-the-art fitness center looks out at the pool and has numerous TVs for great views.

Suites have comfortable furnishings with a sitting area, desks, and beds accented with interesting millwork, stone, and granite. Bathrooms have a spa atmosphere with deep, insulated tubs and separate rain showers that make you feel pampered. Kitchens with high-end appliances and granite counters give you a place to dine when not enjoying the 5 Star chefs on the Las Vegas Strip.

CCR’s in most Las Vegas high-rise buildings are very strict and strongly enforced. To protect the safety of the residents and being unbiased towards anyone, equal enforcement of the CCRs- all of the rules- are strictly adhered to. The Home Owner Associations in about 1/3 of the Condominium Tower buildings allow short-term rentals. High-rise condominiums with short-term rental ability are called Condo-Tels or Condominium Hotels. There are currently 6 high rises at the Las Vegas Strip with the description of Condominium Hotel AKA Condo-Tels.

The 6 Las Vegas Condominiums Hotels Are:

In these buildings, management will provide renters, charging premium rents for special events and on special occasions. Management will handle everything from admittance to check-out, accounting, and housekeeping. Of course, on-site management retains a percentage of the fees charged from every rental facilitated.

If you have been thinking about an investment home in Las Vegas with the perk of visitation and income to offset the expenditures, a Condominium-Hotels may be the way to go. During the pandemic, owners were required to pay the high association fees so appreciation rates stalled. Currently, the condo-tel market has some homes for sale with very good values. A house may be a better fit for you. Feel free to contact us and ask questions. 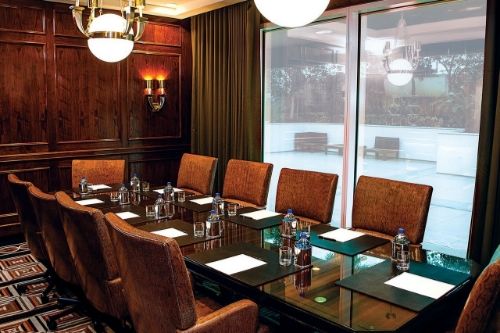 Condominium Options In Other Areas

The first thing to decide is what area you want to have your home in. If you want to own part of the Las Vegas Strip, what type of property do you want? Every building is different. Call us, we may know which building is what you want right away when you tell us what you’re looking for.

The second thing is to determine if you want to live in the building, stay sometimes, or do you want to rent the unit out when you are not in residence. This makes a difference as to which buildings to consider. Some Condominium Hotels allow owners to live in their residence full time or to rent it out on their own and some do not.

There are high-rise towers on the Las Vegas Strip and in Summerlin that cost between $250K and $10M. However, Condominiums off of the Las Vegas Strip or in Downtown Las Vegas can be quite stylish but are mid-rise and regular complexes. The best part? They cost a lot less money per square foot. Luxury townhouses or golf villas may be another option for you to consider for your housing needs.

We can also show people areas before narrowing down options- we call it a 3-Hour Tour. There is an entire city surrounding the Las Vegas Strip with many housing choices. High-rise condominiums are available in a few places off of The Strip. Mid-rise loft-style housing is available downtown and around town. Give us a call and let us show you some elegant homes in the heart of “The Entertainment Capital of the World! All Las Vegas High Rise Condominiums are shown by appointment only so allow time. Call or text us with any questions or for an appointment to see some of these elegant towers- 702-750-7599.

This website and information are made available for you to explore by Kurt Grosse with Realty One Group. Kurt is a Las Vegas Top-Producing Realtor since 1996 and a Retired Building Engineer (P.E., C.E.). His goal with his buyers and sellers is to use his skills and knowledge to protect them in this ever-changing Las Vegas Real Estate Market. With how quickly homes are built in Southern Nevada, his skills are invaluable.

Free “We Wear Because We Care” Templates